PBS was targeted as one of the first things the Republican candidate would cut to reduce federal spending. The silliness of highlighting cutting PBS funding as a method for reducing spending is stated, very nerdily, by Dr. Neil DeGrasse Tyson: 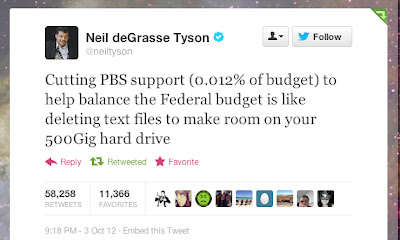 But, I don't even know that this is very important. I agree that wasteful spending should be reduced, no matter how small a proportion of the budget it is. But I do not think that PBS is wasteful spending. In addition to supporting educational television, and providing a resource to children whose parents cannot afford or choose not to send them to preschool, PBS is a system of local stations that provide jobs, and connect people within communities.


PBS has responded with a well-thought and supported statement. Although they also highlight how little, relatively, the federal government spends, they point out that:

For more than 40 years, Big Bird has embodied the public broadcasting mission – harnessing the power of media for the good of every citizen, regardless of where they live or their ability to pay. Our system serves as a universally accessible resource for education, history, science, arts and civil discourse.

A key thing to remember is that public television and radio stations are locally owned and community focused and they are experts in working efficiently to make limited resources produce results. In fact, for every $1.00 of federal funding invested, they raise an additional $6.00 on their own – a highly effective public-private partnership.


Numerous studies -- including one requested by Congress earlier this year -- have stated categorically that while the federal investment in public broadcasting is relatively modest, the absence of this critical seed money would cripple the system and bring its services to an end.


PBS is a resource that I want supported with my tax dollars.
Posted by mathbionerd at 12:30 PM