A friend shared this story today, and I was very moved by it. It was a wonderful reminder of the power of acceptance. Although the story centers around the person receiving acceptance, for who she is,  for me, the take-home message is about the significance of being accepting of others. Specifically, this line drove that home:

"Her love had given me the final affirmation to move forward and become the person I was always meant to be."

Thank you to everyone who has supported me, and continue to support me. You have helped me become the person I was meant to be. I will do my best to pay it forward.
Posted by mathbionerd at 2:37 PM No comments:

I think scientists should spend more time making easy-to-understand science snippets, like this:

Maybe not with dogs. Little brown dog would never behave this well. But, something similar. Getting real concepts across in a simple, clear, concise way is not always easy, but it what we, as scientists, have to do.
Posted by mathbionerd at 3:40 PM No comments:

I've been doing a lot of writing and editing lately, and yesterday Microsoft Word quit. When I tried to reopen it, I received a strange error message. It seemed so strange that I was compelled to share it here:

Email ThisBlogThis!Share to TwitterShare to FacebookShare to Pinterest
Labels: frustrations

You are not alone.

A resource I came across today to help freethinking parents, kids and teens: http://kidswithoutgod.com/
Posted by mathbionerd at 11:56 AM No comments:

Y chromosome in the news

I'm surprised to have a talk picked up by the press, rather than a published paper. I guess this means we need to submit as soon as possible!

Thanks to Tia Ghose for taking the time to ask me some questions and write it up: http://www.livescience.com/24718-y-chromosome-not-junk.html

A quick search shows that her article got picked up by NBC Health, HuffPost, and CBS, and likely a few others.
Posted by mathbionerd at 9:33 AM No comments:

This was my year attending the annual meeting of the American Society of Human Genetics (ASHG). Wow! The meeting was enormous, but well-organized. The process for uploading presentations, as well as the technology personnel themselves were fantastic, from a speaker/moderator view. Even though the broad focus is human genetics, I found that, similar to the annual meetings of Evolution or SMBE, the topics vary significantly, and often sessions of similar interest (to me at least) were scheduled concurrently. The venue and schedule were very amenable to switching between sessions, and for facilitating interactions during the breaks. I especially liked that there was space to allow posters to stay up multiple days, and to stagger presenters from each poster topic.

I tweeted less than usual, but I blame this on a conference being too close to home (such that I could attend the conference, but still had all the responsibilities of being "home").

Here's a synopsis of ASHG2012. In particular, I'd like to point out that the Nielsen lab got a bullet point, as did my talk!

"- The Nielsen Group is still working on high altitude adaptations. They don’t see hard sweeps. Of course I didn’t get confirmation of whether these were old variants, but it looks as if a lot of preliminary stuff did not have the power to detect anything in the first group. As usual they are up to something.- Speaking of the Nielsen Group, Melissa Wilson Sayres’s work on purifying selection on Y chromosomal lineages was persuasive to me. Basically, effective population differences (e.g, polygyny) just can not explain the lower diversity of the Y lineages (they ran simulations). Luckily for the phylogeographers this won’t impact the utility of Y trees (positive selection would, but that’s not what she’s talking about). I’m a little confused whether it was Sayres’ talk or not, but these results may explain the discordance in coalescence between mtDNA and Y lineages (the former has a deeper coalescence)."

I didn't mention it specifically, but yes, I do think that purifying selection may be able to explain the differing estimates of the TMRCA (time to most recent common ancestor) obtained from mtDNA and chromosome Y studies, by reducing the time to coalescence for the Y lineage.

I'd love to hear what you all took away from the conference.
Posted by mathbionerd at 9:05 AM No comments:

I am super-excited about the feature for mail-in ballots here in Alameda county (California). I am able to go online, enter my address and birthdate and find out that my ballot was received! Yay! 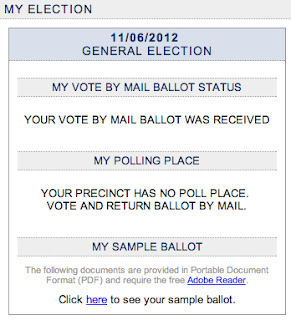 If you're in CA, you can look up your own mail-in ballot here: http://vote.sos.ca.gov/unprocessed-ballots-status/.

Posted by mathbionerd at 9:47 AM No comments:

Email ThisBlogThis!Share to TwitterShare to FacebookShare to Pinterest
Labels: politics


Many from the Nielsen lab are presenting posters and talks at the 2012 meeting of the American Society of Human Genetics.

If you are here, please come talk to us.

If you aren't, you can follow the meeting on twitter with the hashtag: #ASHG2012. I'll be tweeting (@mwilsonsayres).

Posted by mathbionerd at 9:27 AM No comments:


There are many in the Nielsen lab with strong opinions about social, economic, and environmental policies. We don't always agree, but we have many civil discussions.

While the presidential race is getting most of the attention, here in California, we have several other things to vote on as well:
- 11 propositions (there are very strong, and conflicting, opinions for a few of these)
- US Congress members
- State senate and assembly members
- Local ballot measures

You can check out ballotpedia.org to learn more about propositions in your area.
You can find your polling place by simply googling "polling place" and entering your address.

If you are able to vote, and haven't yet done so, please make some time today to contribute your opinion to the political process.

I voted by mail last week.

Posted by mathbionerd at 8:19 AM No comments:

Email ThisBlogThis!Share to TwitterShare to FacebookShare to Pinterest
Labels: politics

It was a rough week in the lab. I got a little turned-around on nearly all of my projects at the same time. I generally like having multiple projects, because if one isn't working, there's something else to go to for a break/inspiration/motivation. Not so much this week. With some luck (read: debugging) it ended well, and I'm excited to get started on some new analyses.

Also, this is amazing:

Many great times were had watching Backstreet Law/Till December. This song came up on my shuffle today, and reminded me what a fantastic time I had with good friends, and my future husband, watching this band.

So, for your listening pleasure, and our very Happy Anniversary (yesterday):