You want to put your hands where?

Blind women are being trained by medical specialists to detect lumps during routine breast exams.

A study at the Essen University's women's clinic, Germany, concluded that MTUs found more and smaller tumors than doctors in 450 cases.

Although they don't mention the total number of cases, or the number of cases where doctors found more and smaller tumors than the MTUs, the number is still striking.
Posted by mathbionerd at 12:03 PM No comments:

When is it racism?

Growing up, I had never heard a person of African origin (African American or otherwise) referred to as a "monkey". To me, calling someone a monkey meant that they were fooling-around or being silly. Or, one might refer to oneself or others as a monkey because, evolutionarily speaking, we are primates.

It not only shocked me to learn that monkey is used as on offensive term for people within a certain geographical origin, but flabbergasted that those who use it think it is a negative thing. In fact, being a human being, I'm a little offended that I someone wouldn't think to call me a monkey (which I am, both in the monkeying-around sense, and the evolutionary sense!).

I understand that there is a lot of emotional baggage attached to the word, monkey, when it is used in a derogatory way. I know that I can't understand the kind of hurt and anger it must bring to someone when such a slur is flung at them. I also know that I am now self-conscious that I will accidentally offend someone when talking about evolution.

Stupid racists.
Posted by mathbionerd at 11:09 AM No comments:

So, maybe it isn't better to have loved and lost...

This study suggests that the emotional and physical trauma of divorce lasts a lifetime (in general). However, I wonder what the effects are in other countries, where people don't marry so young as we do here in the US, or even at all. Nor do they take into account long-term partnerships. Also, they don't provide a breakdown of the length of marriage before divorce - I think that could bias the sample.

I went to the original article, found here, and they do reference some previous work that looks at the effects of the longevity of marriage on health:

"Dupre and Meadows (2007) examine the relationship between marital histories and the incidence of chronic disease. Their results suggest the importance of time spent married; age related increases in disease are slowed by longer marital durations. Brockmann and Klein (2004) examine the effects of time in marital states on risk of death. They find that the health benefits of marriage accumulate, while the negative health consequences of being single, divorced, or widowed attenuate over time. They find no evidence that these effects differ by marriage order. Zhang and Hayward (2006) assess the relationship between the marital life course and the prevalence and incidence of cardiovascular diseases at older ages. They find that both men and women who have experienced a marital loss have a higher prevalence of cardiovascular disease and that ever-divorced or widowed women, but not men, show a higher incidence of cardiovascular disease. Duration of marriage is positively related to incidence of cardiovascular disease for both genders, a result that is largely explained by health behaviors and co-morbidities. And Barrett (2000) examines the link between marital histories and mental health in a local sample. She finds that currently married persons who were ever divorced or widowed report worse mental health than continuously married persons; persons who are currently divorced or widowed for the second time show worse mental health than those disrupted for the first time."
Posted by mathbionerd at 12:35 PM No comments:

The blue ones taste better

For anyone who ever claimed they could taste the different colored M&M's, maybe there's some truth to it. Okay, so maybe it isn't about taste, but the blue ones can help heal injuries to the spine.

There I go again - it isn't the M&M, it is the blue dye - and why, by the way, did they think that blue dye would help in spinal injuries? Oh, here's how:

"Back in 2004, Nedergaard's team discovered that the spinal cord was rich in a molecule called P2X7, which is also known as "the death receptor" for its ability to allow ATP to latch onto motor neurons and send the signals which eventually kill them."

"Nedergaard knew that BBG could thwart the function of P2X7, and its similarity to a blue food dye approved by the Food and Drug Administration (FDA) in 1982 gave her the confidence to test it intravenously."

Neato! So, it seems the only bad side effect so far is that it turns the mice blue for a short period of time - do you think this'll become a new recreational drug, something to bring out at parties?

Oh yeah, and thanks to the close evolutionary relationship between humans and mice (as compared to humans and, say, fishes, or toads), we can be reasonably sure that since there were no negative side effects in the mice (other than turning into Violet from Charlie and the Chocolate Factory for a few days), we can move ahead with the assumption that the drug is safe enough to continue into human trials. Yay evolution!
Posted by mathbionerd at 12:22 PM No comments:

Email ThisBlogThis!Share to TwitterShare to FacebookShare to Pinterest
Labels: inanity

As a reminder when we get a little too cocky, maybe we should take a step back.
Posted by mathbionerd at 10:41 AM No comments:

I always get into discussions about how biased, and in which direction, different news outlets are. I have to make a point today, though, that I am quite happy with the Christian Science Monitor for their piece on the growing numbers of atheists in America. It isn't rude, or skewed, but presents comparisons, statistics and personal stories, all while being respectful. I like it.

I think they might be my new favorite news coverage site. Although, it would be nice if they had a Science or Science and Health tab across the top. I noticed most of the science-y articles can be found under "Environment", or "Innovation", but those titles are a bit specific.
Posted by mathbionerd at 7:26 AM No comments:

Because it makes me happy that one of the most viewed videos on the web is both funny, and emphasizes dance!

Posted by mathbionerd at 5:07 PM No comments:

Email ThisBlogThis!Share to TwitterShare to FacebookShare to Pinterest
Labels: fun

Yesterday Scott, Chip and I hiked up the mountain at Shingletown Gap and picked about a cup of tiny, ripe, wild blueberries. 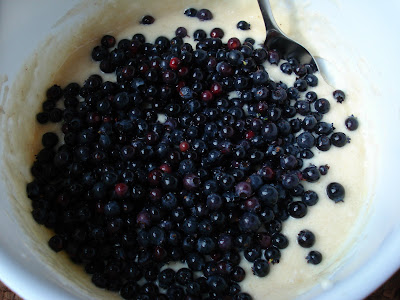 Today they were transformed into delicious blueberry muffins. I followed this recipe, but traded the oil for no sugar added applesauce, and omitted the crumb topping. I'm tempted to go back out there tomorrow and pick some more!! 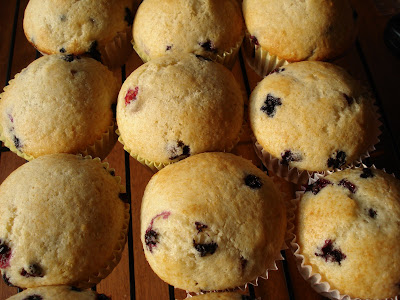 Posted by mathbionerd at 6:00 PM No comments:

Email ThisBlogThis!Share to TwitterShare to FacebookShare to Pinterest
Labels: food

I find it a little odd that so many articles have been published on our paper without actually reading the paper. It seems like most journalists read the press release and altered it even more. Seriously? No wonder I see professors get riled up when people don't read, but only reference their papers. Also, for all the comments that are on blogs so far, not a single person has taken the time to go to the website, read the paper, and make an intelligent comment on the peer-reviewed site.

The point of having articles open access is to encourage public discourse. But, it seems like the public doesn't want discourse, they don't want to read, or even think. Let's just spoon feed everyone some nonsense about the Y chromosome disappearing, forget the cool research in the paper and sell a few papers (or, as the case may be, get a few more hits).

The coverage is nice, don't get me wrong, but it would be even better if it were worth the electricity used to power the monitors it is being read on.
Posted by mathbionerd at 7:30 PM No comments:

Email ThisBlogThis!Share to TwitterShare to FacebookShare to Pinterest
Labels: frustrations

my five minutes of fame

Here are some sites that have already written about our paper (because I'm a narcissist...):

In italian at L'Espresso

We even made a women (and science and politics and etc..) site, Jezebel, which is actually one of the most solid reviews (and least speculative!). Congrats Jezebel :)

Yahoo India
Posted by mathbionerd at 10:54 AM No comments:

Here it is, for your viewing pleasure: my first published research article.


And, because this is sure to happen to some degree (and has already started: How it will be interpreted.

CANOE -- CNEWS:
Photo of the Day

Shared via AddThis
Posted by mathbionerd at 8:09 AM No comments:

Drawing the line between art and just plain creepy

What is up with the Danes?


I have to wonder why some structures/pictures/statues/whathaveyou are considered art.
Posted by mathbionerd at 6:11 PM No comments:

Let me count the ways:

"Everything is possibly wrong."

"I think it is much more interesting to live not knowing, than to have answers that might be wrong."

"I don't feel frightened by not knowing."

Posted by mathbionerd at 8:40 AM No comments:

It is strange to me that the military expects courage, honesty and integrity from its soldiers, but does not always uphold those values itself. Why one's sexual orientation should matter when risking one's life to defend and protect a nation is beyond my imagination. Homosexuality is not a mental illness. It is not a depravity, a fetish or an obscenity. Gay men and women are no more likely to act inappropriately towards their peers than their heterosexual counterparts. In fact, from personal experiences, I've found it is quite the opposite.

"the Guard's Federal Recognition Board heard from members of Choi's unit, his commanding officer and fellow soldiers who served in Iraq, and reviewed more than 150 letters of support for Choi, a 2003 West Point graduate and an Arab linguist.

'At the end of the day, they did not consider any of that material [to] whether he was a good soldier," she said. "It was solely about whether he said he was gay.'"

I don't buy it that the military is going solely on protocol - there is a unique protocol in the military, different from civilians, and it frustrates me to no end that they're being so ass-backwards about this. Apparently it's better to fire a highly qualified, Arabic speaking, honored and respected soldier and keep the incompetent, ill-mannered punk who just wants to fire his gun in the air to prove he's the alpha dog.

And, I'm not letting Obama off the hook. He did promise to work to repeal the "don't ask, don't tell" policy, and although he is working on it, I agree that:

"'while Obama can't change the law himself, he could sign an executive order halting discharges while the policy is under review.'"
Posted by mathbionerd at 6:11 AM No comments: