Sex chromosomes are fascinating, and we still have so much to learn about how they originate and change over time. This last week I had the pleasure of talking to one of the leaders in the field, Deborah Charlesworth, about explaining sex chromosome evolution and genetics. I hope she'll forgive me for this simplification of a recent beautiful genetic analysis from her lab.

I study sex chromosomes in mammals (X and Y), but lots of other wonderful species have evolved chromosomal sex determination (instead of, say, using temperature or environmental cues to determine males and females).

One of those species is a lovely plant called Silene latifolia, also called a White Campion.


This plant has very young sex chromosomes. Whereas the sex chromosomes in mammals look very different from each other (the X is large and full of genes, while the Y is small and gene-poor), the X and Y chromosomes of the Silene latifolia look more similar to each other. Moreover, while there is good evidence that the mammalian sex chromosomes started to differentiate from one another about 160 million years ago, the X and Y of Silene latifolia only started differentiating from one another 10-20 million years ago. This time can be estimated by comparing the number of differences between genes with one partner on the X and one partner on the Y (the longer the time since they started differentiating, the more differences will have accumulated between the once-identical X and Y sequences), and also by identifying which closely-related species have (or do not have) the same sex chromosome system. The very young sex chromosomes in Silene latifolia are exciting because they let us look at some of the changes that occur during the very early stages of sex chromosome evolution.

Bergero et al. (2013) studied the sex chromosomes of Silene latifolia, and compared those regions with a closely-related species without sex chromosomes (Silene vulgaris, the ugly stepsister-species), to learn about some

Bergero et al. (2013) did a lot of molecular genetics to better understand the sex-specific and the pseudoautosomal regions of the beautiful S. latifolia sex chromosomes. They found:

1. Single ancient source of the original S. latifolia X chromosome.
First, Bergero et al. (2013) found that the genes in the sex-specific regions are found in a single location in the sister species, suggesting that this sex-specific region evolved from a single ancestral autosomal ancestor (green blocks).

2. Two independent additions to the S. latifolia X chromosome.
Looking at the pseudoautosomal region (PAR), Bergero et al. (2013) found that the genes in the S. latifolia PAR are found to reside in two unique regions on the autosomes in the sister species. Moreover, both of these sets of PAR genes are found in a different location from where the sex-specific genes cluster, suggesting they were added at different times (first the block of blue genes, and second the block of red genes). 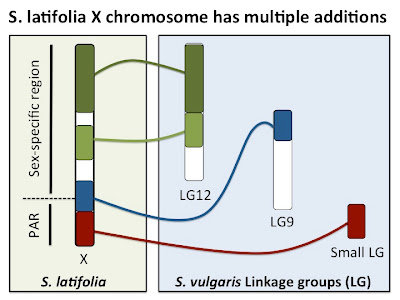 There appears to have also been some rearrangement of the genes in the red and blue regions, but for simplicity, I'll keep them as blocks here.

3. X-Y differentiation is still very active.
Lastly, even though the additions (blue and red) were recent, Bergero et al. (2013) found some evidence that a portion of the additional blocks of genes that have a few unique X-variants and a few unique Y-variants, suggesting that the X-Y swapping stopped recently, or is in the process of stopping. This means that these regions are just now accumulating differences between the X and Y. 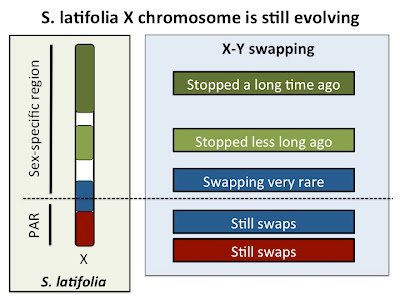 Sex chromosomes (some even younger than S. latifolia) exist in many other plants (e.g. papaya and strawberry). These systems let us learn how quickly sex chromosomes can evolve, and can shed light on how our own, old, sex chromosomes change over time.

Expansion of the Pseudoautosomal Region and Ongoing Recombination Suppression in the Silene latifolia Sex Chromosomes.

Posted by mathbionerd at 7:35 AM

What do you mean by they can still swapping parts of the DNA? During mitosis or what?

Thanks. What I understand is extremely interesting and would love to comprehend all :)

Specifically, they can still recombine, in both mitosis and meiosis. The swapping (recombining) during meiosis are the ones that are important for passing on to the next generation.

When regions can swap DNA (recombine), these regions can fix errors that occur on one strand by using the other strand as a template.