This summer I had the opportunity to serve as a research mentor for undergraduate students, and I jumped on it. I put together project summaries, interviewed students, and ultimately choose two students. We set up schedules and discussed project outlines at the beginning of the summer. This morning, both students presented their summaries at our group's lab meeting. I am so proud of both of them!

I learned so much from working with both of them; time management, how to work with different personalities, and the importance of preparing for meetings and setting deadlines, among other things. Although I thanked them in person during lab meeting, I would again like to acknowledge their enthusiasm for science, their research accomplishments, and their dedication to research throughout the summer. I have now mentored three undergraduate students (the first was at Penn State), and can say that all of the experiences have both enriched me, and eliminated any reservations I  had about mentoring students. Likely these students have just lulled me into a false sense of security regarding future mentoring experiences. Below is a brief introduction to each student, a summary of their project, and description of their accomplishments.

Project 1:
Kevin Luo just finished his first year at UC Berkeley in the Molecular and Cell Biology (MCB) program. He has yet to determine his primary emphasis, but enjoys research and is currently planning to pursue it in the future. Kevin's summer research focus was studying the evolution of mammalian X and Y chromosomes: 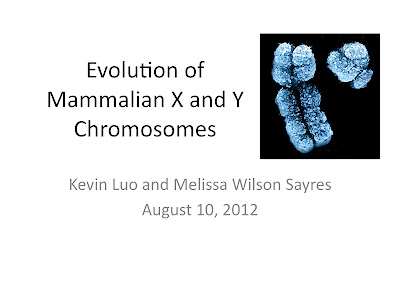 Evolution of the X and Y chromosome

The mammalian sex chromosomes, X and Y, are unique in the human genome because they used to be identical (they evolved from a homologous pair of autosomes). Today, after a series of recombination suppression events (forming evolutionary strata) the sex chromosomes are extremely different, with the large X chromosome found in both males and females, containing over 1000 genes, while the Y chromosome is restricted to males, and contains fewer than 100 genes. This project focused on the evolution of X- and Y-linked genes in a variety of species to learn about strata formation on mammalian sex chromosomes. Kevin learned how to data mine, align divergent sequences, build phylogenetic trees, and analyze results.

Project 2:
Paulina Tsai just finished her third year at UC Berkeley in the MCB program. She is a Physiology major with a Cal Teach and Global Poverty and Practice minor. Paulina's summer research focus was studying gene duplication in nematode worms and flies: 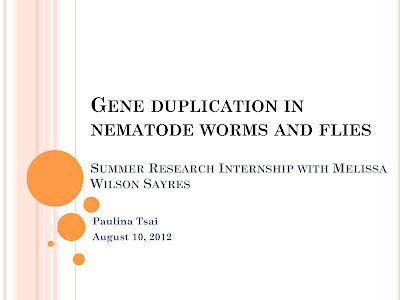 Phosphotase genes have been shown to be involved in male meiosis. The evolutionary history of phosphotase gene has not been well-analyzed, due to a lack of genomic data for multiple species. We are curious whether this expansion was specific to certain nematode worm or fruit fly lineages, or whether the expansion was more ancestral. This project utilized comparative genomics analysis of recently sequenced nematode and insect genomes to address these questions. Paulina learned how to build phylogenetic trees, conduct sequence similarity searches across a diverse array of species, and analyze results.

Posted by mathbionerd at 3:10 PM