One of the topics I study is male mutation bias. In females all of our eggs are formed at birth (minus the last meiotic division, which happens monthly in humans), while males continue to produce sperm throughout their lifetime. If most mutations occur through errors during replication, then we expect more mutations to originate in the male germline (which is continually replicating to produce new sperm) than in the female germline. 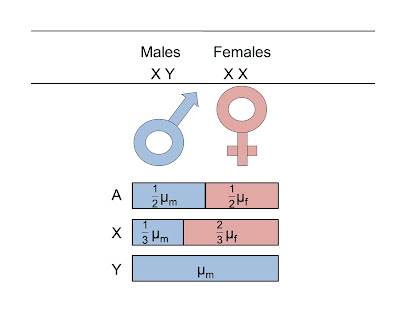 By comparing substitution rates on any two pairs of chromosome types (X/A, Y/A or X/Y), and doing just a little math, we can solve for the male-to-female mutation rate ratio (Um/Uf = alpha). If alpha is equal to 1 then the male and female mutation rates are equal, and there is no bias. If alpha is greater than 1 then we can deduce that more mutations come from the male germline than the female germline.

So far alpha has been equal to or greater than one in all mammals studied. How cool is that?! There are many implications of male mutation bias, and I'll talk more about this in an upcoming post.

What inspired me, after so long, to finally give the background to one of my areas of interest? Was it interest in furthering your understanding of the science that I'm passionate about? Was it a general interest in promoting scientific literacy? Was it my enthusiasm for my research? Well, yes.

But most of all, I wanted to help you understand why this cartoon is especially funny to me. 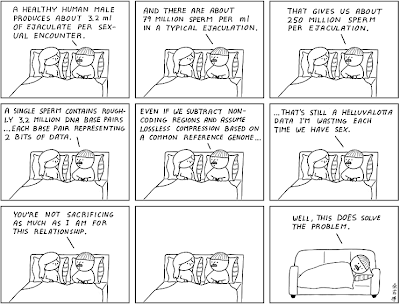