I hope Michelle Bachmann gets voted out of office. Yesterday.

A recent article discusses the disgusting lows the people in one town have sunk to regarding their attitudes about LGBTQ individuals, and children. I wish their ideas were just because they are uneducated, because we can all learn new things (I do it every day, and hope to the rest of my life). I think anyone is smart enough to know that all people, but especially kids, deserve to be treated with patience, and love, and support.

Unfortunately, in many circles there is a systematic indoctrination to hate, to classify "us versus them", and for people in Bachmann's circle, LGBTQ happen to be a "them". I think her inability to tolerate people who are different from her (e.g. gays, immigrants, other religions), is a failure of our society to accept such hateful views. She can only exhibit so much hatred because those around her affirm those ideas. And, we only hear about her because enough people accepted her bigotry and decided to vote for her. It reflects poorly on tolerant people of every persuasion that she holds a public office. 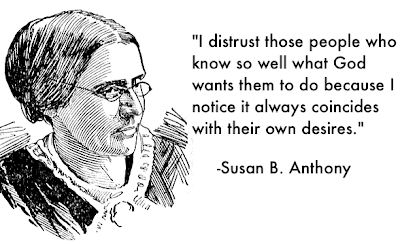 Friends of mine have claimed that Michelle Bachmann is not a "true Christian", because of her actions. I'm always wary when people talk about "real Christians", or being "true to the faith" because I am confident that, in her mind, Michelle Bachmann is the realest kind of Christian there is. I agree that it is easier to feel justified in hateful behavior when one believes it is divinely supported. Often, my friends that speak of being "true Christians" are the best kind of people, believing in equality, patience, tolerance, and kindness for the sake of doing good. I am happy to say the same beliefs are shared of my atheist, Jewish and Muslim friends. (But maybe it's just that I try to befriend people who will help me be better, regardless of their religious affiliation.)

I am optimistic that many people do their best to do good things (whether they are religious or not), but there will always be people doing bad things (whether they are religious or not). I think religion, versus secular beliefs, has the pitfall that it can more easily be corrupted by people who want to use it to further their own dispicable agendas. Unfortunately, it seems that this is just as easy today as it was 200, 500, 1000 years ago.
Posted by mathbionerd at 10:39 PM