Today is Veteran's Day in the U.S.A., and I'd like to say a special thank-you to all the military service members in my life especially my little brother, both my grandpas, my step-brother-in-law and some of my best friends from high school. Being a scientist, I am often surrounded by international researchers who may know one, or two people who have actively served in war-zones. Not me. I can think of at least a dozen friends and family members off the top of my head who have been in war zones  (Iraq and Afghanistan, as well as during the Vietnam war, the Korean War, WWII, and others I'm probably not aware of). Give me a few minutes and I can probably list two dozen.

Here is my brother, dad and grandpa, a few years ago: 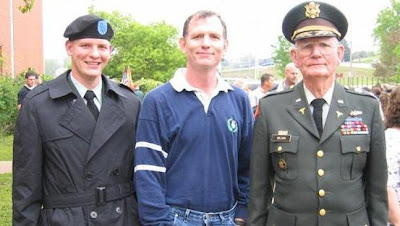 I was planning to take this Veteran's Day to write a longer post about thanking all of our Military, and acknowledging that there are many atheists in foxholes. While my friends who have served in the Military tend to be overwhelmingly supportive of diversity (whether it be religious, sexual orientation, gender, or you name it), because they all work together towards their common goals, it seems many civilians have difficulty supporting the same thing (in or outside of the military).

But, that will have to wait for another day. On this Veteran's Day I am going to try to raise some awareness about the growing number of suicides among members of the Military each year. Here are two cartoons that really get the point across.

A recent report discusses the severity of this problem, proposing several reasons for the spike in suicides among active military members and also providing suggestions to reduce suicide rates. Some of the proposed reasons for the increasing rate of suicides among active Military personnel (suicide rates are predicted to be very high among veterans, but are quite difficult to accurately assess) are:

- The mental health screening process following deployment is flawed (anonymous surveys show rates of depression, PTSD, and suicidal thoughts were was much as 4 times higher than in the not-anonymous post-deployment screenings).
- Repeated exposure to military training as well as to violence, aggression and death dulls one’s fear of death and increases tolerance for pain, even among those who never serve in combat zones. (Thus, natural aversions to death and suicide are eroded.)

There is help. Now. Right now. Before any of the above issues are addressed, if anyone affiliated with the Military even has the tiniest inkling they might want to talk to a third party, they should be directed here:

So, for my family and my friends, and all the people I don't know in the Military, please know that there is help. It will get better. Mental illness is not a weakness. No one will think less of you for seeking treatment. In fact, we'll be so very, very thankful to get to celebrate another Veteran's Day with you.
Posted by mathbionerd at 10:15 AM