I'm happy to report that the trip to Nebraska was a total success.

I was able to have some great discussions with some friends and colleagues (Mathematicians, of course!), I enjoyed a couple days with family, and my little girl was fantastic on all four plane rides.

It is a little frustrating to come back from sunny, warm, quiet, safe, Nebraska to a report of an armed robbery a block from our apartment:

On Sunday, September 2, 2012 at approximately 9:00 p.m. an armed robberyoccurred.  The male and female victims, both UC students, were near Parking Structure C when they were approached by two unknown males.  One of the males was armed with a gun.  The victims were robbed of their backpacks and cell phones.  The suspects were last seen fleeing on foot northbound onEllsworth.  BPD and UCPD searched the area but were unable to find thesuspects.  The victims were not injured during the encounter.

But, I'm very happy to be home, and even more inspired to get some research done.

Here's my "little" brother and me, with our respective offspring, after a full day at Omaha's Henry Doorly Zoo. If you ever have the good fortune to find yourself in Nebraska, I highly recommend you check out the zoo... but maybe not on Labor Day weekend. 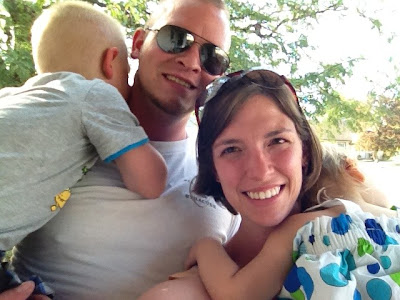 Posted by mathbionerd at 2:44 PM