There has been a ton of buzz about a tumblr feed that took off: dogshaming. The site went viral and was inundated with submissions. Then there were many people who lamented that it is the dogs, and not the owners who are being shamed for their dog's actions.

Okay, sure, owners are partly to blame for their dog's behavior (I especially dislike the dogshaming in reference to being aggressive or biting), but many of the photos refer to dogs who have messed in the house, or gotten into the trash, or are doing other dog-like things. Sure, we dog owners don't like it when our furry family members do something along these lines, but we all love our dogs in spite of these behaviors.

For example, I could submit several dogshamings of our cuddly brown chihuahua rescue:

1. I gladly lick anything the baby shares with me, in between her bites.
2. If my humans don't take the trash out, I'll find all their buried treasures (seriously, why do they throw this stuff away?).
3. I whine pathetically at the playground so all the parents/kids think I'm neglected, and will come pet me.

Although I sometimes get upset with things he does, he is a part of our family, and is an awesome dog. He rarely barks, protects our house, is a great snuggler, a good jogging partner (for me), and waits for everyone to go to bed before he turns in for the night. Most of all, he is our daughter's best friend: 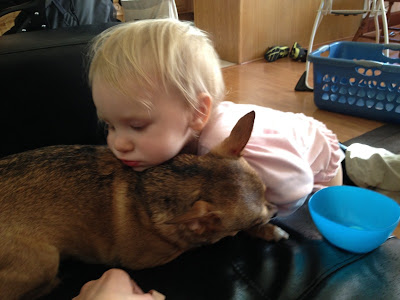 I agree, we can, as dog parents, probably spend more time training our animals, and shouldn't blame them for their bad behavior. But, dogshaming is just an outlet for the frustrations that come with any relationship.

I don't know any of the submitters, but all of the photos posted feature dogs that look well-fed, groomed, and in good health. There are many, many ways to be a bad pet parent (just ask the 3-4 million shelter animals that are euthanized every year). I don't think dogshaming is one of them.
Posted by mathbionerd at 2:18 PM