An article just came out highlighting that - shock! - 39% of male scientists are unhappy with how their work affects their home-life. I've been saying this for a long time. I think "women's" issues in Science should really be parsed into two categories: 1. Family issues (child/elder care, etc); and, 2. Not following traditional male-stereotypes for personal interactions. Although these disproportionately affect women, both can affect male, female and transgender researchers. We should be working to address them, independent of the dominant group affected by them.


I do think having a baby is more tilted towards impacting a woman's research career during pregnancy (which may be more or less difficult case-by-case), and definitely more during the first 6-12 weeks during the physical recovery from labor/delivery. I would also argue that it is more challenging and time-consuming for breastfeeding moms, who have a double-whammy of having to take time to pump at work, as well as always (or nearly always) being the ones to get up in the middle of the night to feed the baby, resulting in a larger sleep deprivation.


That said, it does start to even out after the first year-ish (or earlier for parents that bottle-feed exclusively or primarily). Many of the other responsibilities (e.g. leaving work early to pick up the child from daycare, deciding who will stay home when the child is sick, attending wellness check-ups, figuring what to do during daycare holidays, etc.) are, in a healthy relationship, shared between the parents.


Yes, there's still a larger bias against child-bearing mothers, but as fathers start to pitch in more (and more LGBT couples choose to have children), I think the gender-specific biases start to disappear earlier and earlier.


Many other work-life balance issues, such as the two-body problem, elder care, and even searching for a job may also be traditionally more burdensome for women, but I think  are likely to become more and more independent of gender.


Regarding the male-sterotypes issue, I've been thinking about this since I did a project on gender-baises with respect to mathematics in high school, and it is, finally, becoming more clear to me. Sure, some people still have out-dated biases specifically against having a woman, but most discrimination is more subtle today.


I think, in many previously male-dominated fields the expectation that only a male can do the job are diminishing, but many people still expect the job to be done "a man's way". I'll try to elaborate. For example, traditionally (stereotypically?) men compartmentalize projects, focus on one task for extended periods of time, are aggressive, direct, and dominant in conversations. Alternatively, women traditionally (stereotypically) work better while multi-tasking, view projects holistically, are more likely to wait to speak, less likely to give into dominant/aggressive feelings, and carefully use language to compete in conversations. I think the default in many research fields is to expect a successful scientist to exhibit traditionally masculine qualities, while traditional feminine qualities are not valued equally. Most of the successful female scientist today do not have children, are outspoken, direct, blunt, aggressive, and dominant in conversations. This approach works, but I happen to think both approaches will result in the same, high-quality science. Unfortunately, I don't think the majority of people hiring and giving tenure agree.


I think I'll do my best to change that mentality. I'll do it for myself, and for my peers (men and women) who work different from the norm, and for my sweet baby. In 20 years, I hope she feels empowered to do whatever her heart desires whether it be go to grad school, or do ballet, or be a roller-derby queen, or drive a space shuttle: 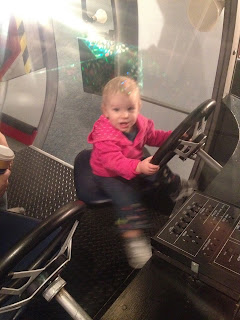 Posted by mathbionerd at 8:36 PM