Save the (towel) Animals! 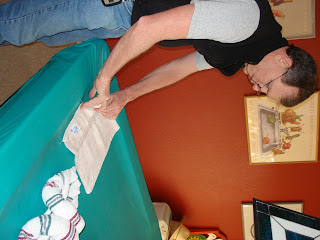 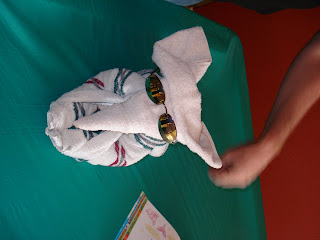 My dad (George) and step-mom (Deanda), recently learned how to make towel animals on a cruise they took along the west coast. Here are some pictures of my dad showing us how to make a towel elephant.
Arizona is beautiful this time of year (of course), and we have really been enjoying our trip.  We arrived and got to try out the new light rail system. It only covers about 20 miles of the city, and less than 10 in the direction we needed to head, so, with the help of two very friendly strangers, we caught a bus that took us to within 5 miles of my dad's place, where Deanda came and picked us up. While waiting at the gas station, who should we run into but a couple from Hershey and Lancaster PA. The two just moved out here three days ago! 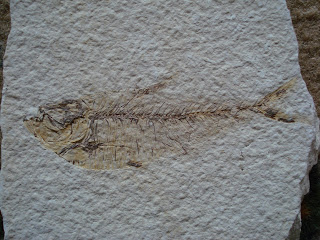 We toured the Rock and Mineral Show, where I picked up a cool fish fossil! I'm going to have to figure out how to mount it in a shadow
box, and which wall I'll put it on. I was trying to come up with a name for it, but I think, in honor of the 150th anniversary of the publishing of the The Origin of Species, and the 150th anniversary of his birth, I'll just call it my Darwin Fish.
Posted by mathbionerd at 5:55 AM

An embedded video of these shenanigans would be clutch!

I used to have a small fossil of a trilobite but your fish is waaay cooler. I'm jealous! Any chance you might know how old it is?